What is Defect or Bug Life Cycle in Jira : And its Stages The Jira bug life cycle consists of a definite number of steps from identifying the bugs to resolving the bugs.

Jira is an Atlassian product that has got enormous popularity for bug addressing. It is one of the widely used tools in the industry for any software life cycle management and in DevOps culture. The Jira also addresses the Kanban system way of software management and the Scrum way as well.

One of the most promising features of the Jira tool is its dashboard full of features that show how the bugs are found, captured, assigned to specific individuals, and finally tracked for closure. It can be applied to any software language and any type of software management approach as discussed above. The defect life cycle in Jira is the most comprehensive approach in the resolution of the bugs with the help of the Jira tool. Let us, deep-dive, into the Jira bug life cycle.

What is the Jira Bug Life Cycle?

The Jira bug life cycle consists of a definite number of steps such as New, Assigned, Opened, Duplicate, Differed, Not a Bug, Rejected, Reopened, Fixed, Retest, Verified, and Closed.

The following are stages in detail,

1. New – The Bugs are new and are found by the tester during the testing phase and the bugs are not repetitive ones they are assigned as new bugs. The new bugs go through the entire bug life cycle in Jira.

2. Assigned – The bugs identified by the testers are now assigned to the development team to specific individuals for correction or resolution. This assignment is done in the Jira bug tracking tool with defect ID and defect details.

3. Opened – The bugs after assigning to the specific individuals of the development team are created with Opened status. This status of the bugs will be there till it is changed to the processing stage or closed stage.

4. Duplicate – In case the developers find that this bug is duplicate or not the new ones but already have been captured in some other functions or a different part of the programming then it is termed as duplicate. However, the action is still taken on the duplicate ones. Enroll in Jira training at StarAgile institute to learn the Jira tool and hands-on with Jira bug life cycle management.

6. Not a Bug – If the bugs do not cause any changes in the functionality or security of the code or the application the bugs can be termed as “not a bug”. That is no action is taken on these bugs. They are not addressed by the developers and informed to the testers.

7. Rejected – If the bugs found out by the testers are not the authentic ones then the bugs are rejected by the developers. Meaning there may be a bug but it may be just a way the programming constructs are made. So they are rejected.

8. Reopened – If there are bugs that are closed in specific parts but due to reprogramming by the developers to fix certain issues or bugs but these bugs may resurface due to the errors in the programming itself. When this happens is when the same bugs resurface themselves in the coding, it is made to the reopened state. These bugs may need to be carefully resolved so that it does not appear again.

9. Fixed – If for example the bugs have been addressed or there is a programming fix to the bugs then the bugs are termed as fixed. That means that the program wise either in the functionality or security-wise these bugs are fixed by the developers. You can get the Jira learning at the StarAgile institute which has conducted nearly 1 Lac sessions on various topics.

10. Retest – When the bugs are fixed meaning the resolution of the bugs is done and there is no further action, these programs are taken to retest by the tester to test various features of the programming. This step is important to make sure that there are further no bugs resurfacing or new bugs in the coding.

11. Verified – When the bugs are treated and retested they are verified further by the testers and there are no more bugs in the programming then the status changes to verified.

Actual Stages of Bugs in Jira

There are three stages in Jira issue tracking are as follows, 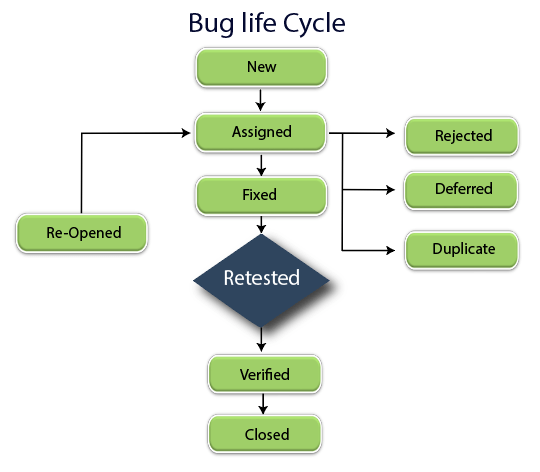 The open stage is the stage when the bugs are identified during the testing phase by the testers and are assigned to developers for resolution.

The work in progress stage is the stage when the bugs are opened and are assigned to specific individuals and then the bugs are in the process of making changes in the programming by the developers. This stage also includes the retest and the resolution confirmation by the testers again after the bugs are corrected.

The work done stage is the final stage in Jira where the bugs are resolved, retested, and confirmed for closure.