DevOps roadmap is the adoption of DevOps culture that includes a lot of advantages such as faster delivery to market, reduction in errors and mistakes, cost efficiency, early error detection, rapid automation, association in the team, great feedback loop, and adoption of various DevOps tools, etc.

DevOps roadmap requires time, effort, and adoption of DevOps strategy in every application or software lifecycle. This becomes the DevOps lifecycle management. Let us begin by adopting the Plan, Build, Code, Test, Release, Deploy, Operate, and Monitor. DevOps eliminates lots of bottlenecks that the traditional SDLC had brought about welcome changes in the environment.

In this article, we will be discussing DevOps implementation roadmap. 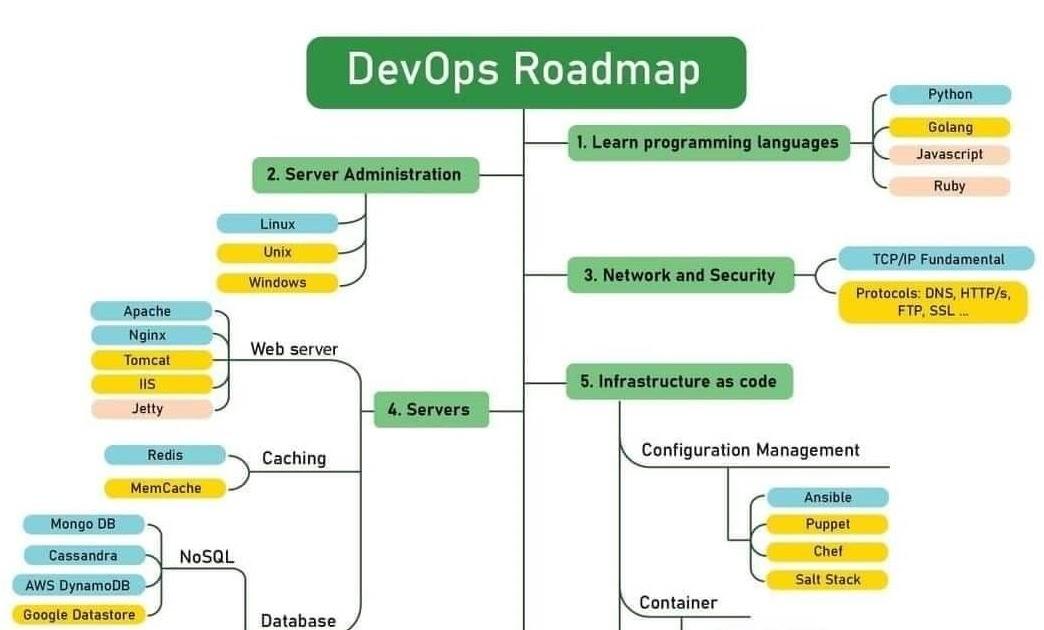 The DevOps roadmap 2022 consists of a lot of strategies to adopt and nurture DevOps culture. Before we go into the DevOps roadmap let us understand why DevOps came into existence. The traditional SDLC had a lot of challenges those are Lot of errors and bugs, software came into existence only in the last phases of the SDLC, thus correcting any piece of the code was a pain, the operations and development team worked in the silos, no automation thus maintenance of the infrastructure for the software or the application was difficult and higher costs of the software, etc.

The DevOps roadmap for anyone who wants to transition to the DevOps culture is as follows,

Learn what DevOps Pipeline is?

1) Let us see what CI/CD pipeline is?

The CI is continuous integration where the code is integrated with all the functionality and then submitted frequently in the version control repository for continuous testing.  The CD stands for the continuous delivery where the tested code is released in the production very often or as frequently as possible for the user acceptance testing and to deploy many versions of the code as the code is being released. Learn DevOps by registering with the leading DevOps training institute that offers the comprehensive DevOps course.

This means the entire set of infrastructure to deploy the code in the production, including the testing and development environments are managed with code that is automated fully so that infrastructure does not require any manual intervention.

You need to ensure that all the systems, including infrastructures, applications, and all systems are continuously monitored and logged with a definite logging period. The logs must be collected, correlated and analyzed, and retained as per the rules and requirements.

You need to ensure that the DevOps roadmap consists of learning how we communicate and collaborate within the team and to all the stakeholders.

Any DevOps professional must learn to code so that most of the things are automated. The most used programming languages are Python and Java. The scripting is also used to automate the systems the languages are JavaScript, Node.Js, and Perl, etc.

As part of the DevOps roadmap, you need to learn the OS concepts such as Windows, UNIX, and Linux, etc. The most popular OS for DevOps is Linux. You need to know the Linux fundamentals and how to secure and automate Linux and secure the application deployed on Linux.

As a DevOps professional, part of operations is to manage the servers. The servers are where the applications are hosted and must be automated, secure, configure, manage, and monitor the servers. Automation of the server management is key to DevOps as these servers provide the necessary platform for the applications. DevOps learning from StarAgile is the key to starting a career in DevOps.

The DevSecOps is the security-as-a-code where the security is designed to be included in all the phases of DevOps. As a DevOps professional you need to ensure that you are aware of the networking concepts and managing the networking devices such as Switches, Firewall, IDS/IPS, and routers, etc. You need to ensure you have a fundamental understanding of the network topologies, network protocols, network services, ports, and LAN/WAN/VPN/Internet, etc.

You need to know a minimum of 2 cloud technologies out of Google Cloud Providers, Amazon Web Services, and Azure. Many of the companies are transforming from on-premises to cloud and using cloud services so that they spend only the services offered and not on the infrastructure. The DevOps encourages the use of cloud technologies and aids in coding, automating various functions in the cloud.

DevOps unlike traditional SDLC is transforming the way the applications are built, tested, and deployed in production. Much complex and repeated work which normally is complex and error-prone tasks is done by automating the work. Human work involves a lot of errors and is complex to do without automation. Enroll for the DevOps certification at StarAgile institute and get certified in DevOps with the leading DevOps institute.

There are various dev, test, and prod environments that consist of a lot of infrastructures that need to be configured, automated, managed, monitored, and logged. This is done as discussed with code and that is why the phrase Infrastructure-as-a-code.

DevOps is becoming the de-facto standard for developing and operating applications. StarAgile provides the DevOps online training for all the professionals who would like to jump into the latest buzzword that is DevOps. DevOps has been in the market for almost a decade and the DevOps is being adopted by many companies all over the world.

To start the DevOps roadmap you need to be Jack of all and a Master of few technologies that DevOps offers. Learn Devops and prepare yourself for the DevOps journey. Happy Learning!!!