What is Continuous Integration in DevOps What is Continuous Integration in DevOps

DevOps is the culture that integrates development and operations in one cycle and is used to develop code with ease, with multiple iterations, and save time and cost while deploying, operate and maintain high-quality code to the customer. DevOps life cycle management is the new buzz words that are used instead of Software Life cycle management or SDLC. It consists of a plan, code, build, test, release, deploy, operate, and monitor. The DevOps pipeline consists of Continuous development, continuous integration, configuration management, continuous testing, continuous deployment, and continuous operations.

We also sometimes call this as Continuous Integration and Continuous deployment as CI/CD pipeline in DevOps. DevOps pipeline is a process in which the code is developed, tested, and deployed in continuous iterations instead of doing everything at the end. Every part of the code goes through the DevOps phases instead of all at the end. In this article, we will see what continuous integration in DevOps and its benefits is.

So what is Continuous Integration in DevOps? It is DevOps practices where the developers integrate the code into the shared repository frequently and wherein each integration is done by an automated build and automated tests. It is the key to DevOps practices where it is used to integrate various stages of the DevOps life cycle or the DevOps pipeline.

What are Traditional Integration and the common problems associated with it

Let us see how the traditional model works,

Since the developers are adjudged on how quickly they build the code and sysadmin on how the app performs in the production. As the change is something which is the leading cause of breakage these 2 departments are at odds with each other. Register for the DevOps course online to know how to solve the problems of the traditional software development life cycle.

Let us see other areas of the traditional code development process,

DevOps solves these problems by continuously taking all the phases at once when the code is being developed, integrated, and tested and deployed and operated. So there are fewer bugs or errors and it takes less time, cost and the operations are performed in coordination with each other multiple times of the day till the end. Enroll in the Online DevOps course at StarAgile to know more about DevOps.

Definition of Continuous Integration and its Benefits 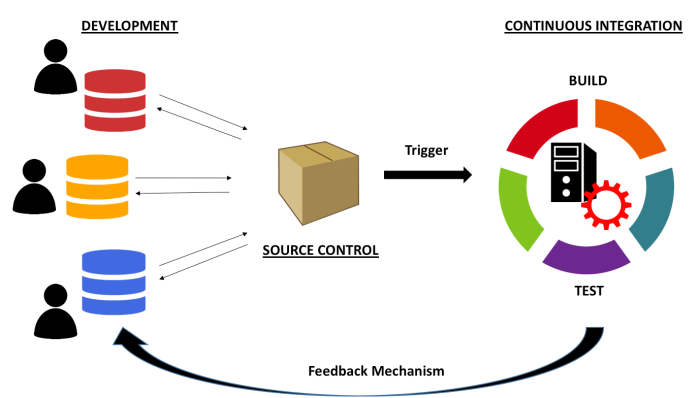 In Continuous integration, the developers build, run, and test code in their workstations, then commit the code in the version control repository. Then comes the next steps such as building the new source code, do unit tests, and then the build is deployed test environment for system testing. These are usually done in an automated way. Then the report is generated for this version of the code with the build number, defects, and several tests. This is repeated for every version of the code committed in the version control repository. To explore and learn DevOps take up the DevOps certification training at StarAgile institute.

If there are any errors or any steps fail the integration is stopped, results informed to the team, the team fixes the defects and commit again then the above steps are repeated.

The Top 10 Benefits of Continuous Integration are as follows,

The system requirements of the CI are as follows,

Why Jenkins for Continuous Integration

Jenkins is the Java written open source continuous integration tool. You can automatically build and test the code in one go and report the errors or bugs to the team.

Jenkins is a free and widely used CI tool in the industry. There are around 300K + installations already registered and are growing day by day. It is a server-based application and requires a server such as Apache Tomcat. The reason why Jenkins is widely used is that its monitoring of the repeated tasks that arise during the development cycle. Jenkins can automate the build and test activity at a very rapid rate. Jenkins supports all the stages of the DevOps life cycle such as build, test, documenting, deploy, and other stages, etc. Jenkins integrates with various other tools with the help of the plugins.

We now know what is continuous integration is and its benefits. We also now know how the Jenkins tool helps the CI DevOps pipeline in an automated way. If you are aspiring to be DevOps certified professional, we recommend that you take up the DevOps certification course at StarAgile and also check the Jekins interview questions to prepare for a Jenkin interview.