What Are Docker Commands?

Docker is one of the prominent virtualization tools that enables close integration with the host server. It indicates OS virtualization. The majority of developers choose docker because OS interfaces are intertwined with developers. Optimization of the performance of the system starts with the understanding of docker commands. They are extremely lightweight virtual machines.

Docker has undoubtedly transformed the way development teams working. It enables you with a mechanism of moving code between servers, improving security, and decoupling applications. So if you don't currently use Docker in your development process, now it's time to take a careful look.

The objective of Docker is to design and implement compute images and also to deploy them in containers. As a result, the most relevant commands perform this function and reveal this information.

To get started with Docker functions, you must first decide whether you interact with images or containers.

As soon as you have a clear understanding of the issue, you can identify the necessary instructions.

The docker client can interpret several commands. Whether at the development or operations level, anyone participating in software development will benefit significantly from DevOps training.

Why Docker Commands Are Used

Docker is a commonly used containers solution that developers and operational processes used to construct and automate the deployment of compact containers on virtual machines. This is done to ensure that programs run smoothly in a variety of situations.

Docker has transformed the way programmers and engineers carry out their work. It provides a method for moving code between platforms, improving security, and decoupling dependencies between different applications. Therefore, if you haven't already included Docker in your planning process, now is the time to use it. Docker simplifies the development process by enabling developers to work inconsistent settings while utilizing the storages to host their applications. Containers are an excellent choice for continuous integration and delivery (CI/CD) operations.

Docker's container-based infrastructure enables workloads to be highly customizable. Based on the environment, the Docker container can be deployed on a developer's workstation, on physical or virtual servers in network infrastructure, on cloud providers, or in various settings.

Dockers' accessibility and lightweight functionality make it very simple to effectively manage workflows and scale apps and services in almost real-time, as dictated by business demands. Docker is a compact and fast container management system. It is a realistic, cost-effective solution to allow you to maximize the utilization of your computer power for business purposes. Docker is ideal for high-density environments and small and medium-sized deployments that require more performance with minimal resources.

Docker's flexibility enables enterprises to build and maintain systems across several platforms. This improves operational efficiency and developmental productivity by allowing the apps to run smoothly across multiple servers or on a single server. DevOps course certification enables continuous reviewing throughout the software development, allowing for a holistic perspective. This performs more stable and, ultimately, a higher-quality product for the end-user.

You can enroll for the DevOps certification course to gain job advantages depending upon your expertise and skillset. 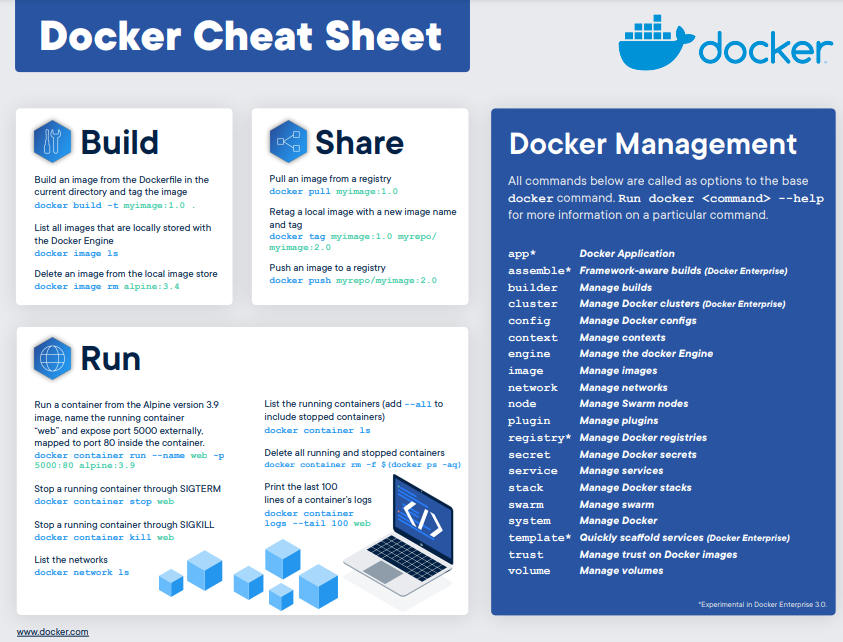 The following are Top 17 docker basic commands to experiment with on the command line.

Docker run is likely the essential tool on the Docker commands list because it allows you to run containers. It creates a new container and then begins it with the specified line. It's the equivalent of running docker create followed by docker start.

Docker Hub is used in this case to download, develop, and execute the docker named "hello-world." Explore with it.

Although this command makes a new container and sets it to perform the specified program, it does not run the chosen program. STDOUT is used to print the ID. This is equivalent to docker run, except that no container is launched. It can be reactivated at any time by running the command prompt docker start <container id>.

This is advantageous if you aim to build and set up a container for later execution.

The hello-world container will be downloaded and created but not activated.

This command starts a container, whether one that has been established with docker create or previously closed.

This command terminates a running container.

This case closes the last example's container. Docker start can be used to restart it if it has stopped working.

This command displays a list of accessible Docker. Only active containers are shown by default, but you can use parameters such as-a to obtain a list of all available docker containers.

The preceding command returns a list of all containers on the systems.

It removes a container from the current location. After listing existing containers with docker ps, you will use this command to terminate one or more of these.

This example removes the ‘redis' container from the system. The -f flag compels the action, indicating that the container will first get a SIGKILL command.

rmi is an acronym for image removal. Like docker rm, it removes the docker image instead of an active image.

This example will delete the filename 'test' from the image. To obtain a list of ideas and their associated ids, run the docker images program.

It allows you to log onto a docker registry. This statement can be used to log in to any business or government registry. This is likely to be used for logging in to Docker Hub.

By selecting the server name, we can log in to the self-hosted registration. Alternatively, you can use docker login to access your Docker Hub registration system.

A tag named TARGET IMAGE that points to the source image, SOURCE IMAGE is created with the help of this function.

The docker push function is used to publish your copies to Docker Hub or another repository. It is a critical component of the implementation process and must be used in collaboration with docker tag and docker login to function effectively.

This example will add the image that we previously tagged to the storage.

This example will start a new Bash account in the ubuntu_bash container.

It can be advantageous to commit changes to a container's files or settings to a new image. It allows you to debug an interactive container or export a functional dataset to a different server. The commit action excludes data from volumes mounted within the container.

Docker kill is a subcommand that terminates one or more containers. The container's primary process is completed with the SIGKILL signal (by default) or with the --signal option. You can kill a container with ID, ID prefix or name of the container.

The example delivers the default KILL as the username signal to the image's name my_container.

As shown here, you can obtain information about the container's networking component (IP address).

This command retrieves pictures from the docker repository. After searching for an image, you can pull it from the Docker registry if it is accessible. If you've created a local registry, you can mention its path to retrieve data from. A registry path is identical to a URL, except it does not contain an https:// protocol specifier.

The command pulls the testing/test-image from a local registry (Docker Hub) that listens on port 5000 (myregistry.local:5000)

This command is used to create an image from a specific docker file.

Docker images are created using the docker build command, which takes a Dockerfile and a "context" as input. The context of a build is a collection of files located in the provided PATH or URL. The build process can use any of the context files.

Here, the first part specifies the location of the reference that Git will check out, which can be a branch, a tag, or a remote reference. The second part denotes a subdirectory within the repository that will serve as the build context.

Docker has established a strong presence in developing trends. You must become familiar with its command prompt as soon as possible. The first step is to become proficient with the docker command prompt.

Before you go into DevOps online course, you need to determine what you'd like to accomplish by implementing it.

If you're driven to your IT profession, adding a DevOps certification to your years of expertise is an excellent way to stay current in an ever-changing market. You can accomplish additional work with DevOps automation skills and provide more excellent operational assistance.