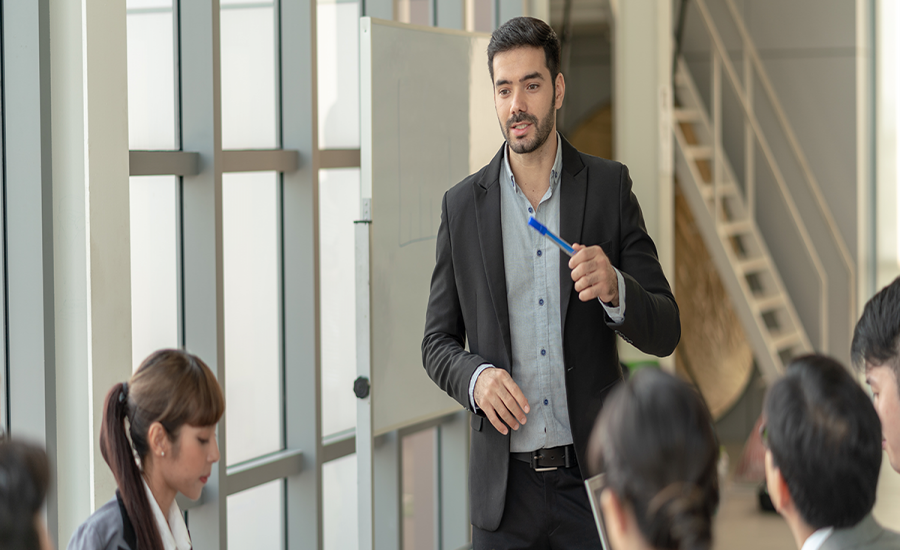 Project Manager Vs Scrum Master? are both same? Which role is correct? Whom to choose? There is a lot of confusion and misconception around all these questions. Some think it's the same, some argue they are not, and people tend to get confused with both roles. The answer is simple. In Agile, there is no role of a Project Manager. There are only 3 roles in Agile namely, Scrum Team, Scrum Master and Product Owner. But nowadays, Firms who are shifting their focus to Agile, who are amidst the evolution or Firms who follow a mix of both methodologies, have a Project Manager who acts as a Scrum Master and vice versa. But let’s be clear, both are not the same, and both have their own set of role-playing and tasks. Further in this blog, let’s dive deep into Scrum Master vs Project Manager.

What is a Scrum Master

The scrum master is in charge of ensuring that the scrum framework is followed properly.      Scrum contains a set of rules and practices, it's the duty of a scrum master to make sure that must be followed by the entire team. The Scrum Master guides and coaches the team through the scrum framework while working with the whole team. The Scrum Master also helps in facilitating communication and cooperation between the leadership and the rest of the team to ensure a successful outcome.

What does a Scrum Master do?

The Scrum Master does a lot of things, but first, we need to understand that scrum is an agile development methodology used to create large projects, usually software. Sprints, short development cycles used in the Agile project management technique, lead to continuous product or service improvement. There are numerous Agile frameworks, and Scrum is a well-liked choice for projects that move quickly. The Scrum Master's competence determines the process's outcomes, which depend on the methodology's high degree of collaboration and requirement for effective processes.

Agile approaches may have originated in IT firms, but Scrum Master positions are available globally in a wide range of industries and for a wide range of organisations. Using Agile project management, a Scrum Master's job is to support teams, projects, and team members. Your duties and responsibilities may change because Scrum Masters can work in many different contexts. You might be acting as a facilitator, coach, or project manager, depending on where you work. Your responsibilities will frequently change from day to day but mainly you will be:

What is a Project Manager?

Project Manager is an expert who organises, plans, and manages projects while adhering to constraints like budgets and timetables is known as a project manager. Project managers oversee the work of entire teams, establish the objectives of a project, consult with stakeholders, and see it through to completion. The project manager is accountable for the success or failure of the project, regardless of whether they are managing a marketing campaign, building a structure, creating a computer system, or launching a new product.

Almost every industry has a demand for project managers. Let's examine the Project Manager in more detail.

What does a Project Manager do?

The phases of a project are often broken down into four groups: initiation, planning, execution, and closure. The project manager is accountable for the following duties:

The key difference between a scrum master and a project manager lies in the course of action and their focus, The Project manager focuses on the timeline, the final outcomes, available and required resources, and communication whereas a Scrum Master focuses on ensuring that all the scrum practices are followed, there is proper established communication between the team leaders and the rest of the team on the ground, and ensure the success of the team as a whole and also each individual team member.

Scrum Master or Project Manager: Which one is best?

This is a question which haunts almost everyone in an Organization. Whom to choose? Who is apt? Who will play a better role? Who will do justice to the role? So, If the Company or a Project is following the Traditional waterfall model, then the Project Manager is the correct role. If the company or Project is following Agile, then Scrum Master is apt. But as I have mentioned in the introductory paragraph, not all the companies have completely transited into Agile, they are somewhere in the middle of a transition from Waterfall to Agile. In such cases, the Project Manager takes over the role of Scrum Master and yet handles both responsibilities. There is no harm in doing so. There is no set of rules to be followed or practised in a certain way in agile or Scrum. For e.g., in Scrum, there are stand-up calls, Sprint Planning, Retrospective meetings and Sprint Review defined in the framework. But if you feel, arranging an extra technical discussion call will add VALUE to your Project, then you can definitely include that. The bottom line is if some process is adding value then go ahead with it. Similarly, whichever role suits your project, call it Project Manager or Scrum Master, you are free to choose. A project Manager playing Scrum Master and vice versa is possible. However, both roles are not the same. Both Project Manager and Scrum Master are different.

What do scrum masters and project managers do?

The project managers are mainly involved with administrative tasks like project initiation, meeting deadlines, budgeting management and several others while scrum masters make sure that the scrum framework is followed properly, whether the team has received appropriate training or not.

Difference Between Scrum Master and a Project Manager?

The major difference lies in their job role. The project manager is a leader who is responsible for the entire project whereas the scrum master trains the teams and makes sure the scrum framework is followed.

Which is better for you scrum master or a project manager?

Well, both are very good choices, it totally depends on an individual what kind of role he finds appropriate. If you want to be in an administrative, leadership, manager or any other such kind of role then go for a project manager but if you want to lead your own team, guide them, make them work towards a common goal and make sure the Scrum framework is followed, then go for Scrum Master.