What is BDD (Behaviour Driven Development) in Agile WHAT IS BEHAVIOR-DRIVEN DEVELOPMENT?

BDD (Behavior-Driven Development) is an agile approach to software development that describes and creates an application to cope with the behavior of a user. BDD encourages developers to concentrate just on the intended function of an app or application, hence reducing bloat, excess code, extraneous features, and a lack of concentration in software development. This technique brings together, improves, and refines the concepts of test-driven development and acceptability testing.

Traditional behavior-driven development plans begin with a discussion among developers, management, and the client in order to develop a shared vision for how the product should operate. The behavior objectives for the product are then assigned to the developers, and once all of the behavior tests pass, the product has met all of its requirements and is ready to be handed over to the customer.

The use of BDD allows you to broaden the pool of input and feedback to include business stakeholders and end-users who may not have prior experience with software development. BDD may be more easily integrated into continuous integration and continuous delivery systems as a result of the larger feedback loop that BDD provides.

You can enroll in a variety of Agile courses to obtain Agile practitioner certification. The Project Management Institute offers the PMI ACP course, which is one of the most well-known courses.

Daniel Terhorst-North pioneered behavior-driven development in the early 2000s, as he stated in a 2006 post titled Introducing BDD. It arose as a reaction to test-driven development (TDD) as a means to enable programmers on new agile teams to “get right to the good stuff” of understanding how to approach testing and coding while minimizing misconceptions. At the acceptance level, BDD has evolved into both analysis and automated testing. Another BDD pioneer, Liz Keogh, began writing and lecturing about it extensively in 2004.

In 2003, Chris Stevenson developed agiledox, a forerunner to BDD, as a tool for automatically writing technical documentation from JUnit tests.

Chris Matts and Dan North proposed the given-when-then canvas in 2004 to expand the scope of BDD to encompass business analysis and documents.

Dan North released JBehave in 2004 to test his idea about eschewing the term "test" in favor of "behavior."

Dan North documented the concept in 2006 with "Introducing BDD."

2006–2009: Several new tools are published, including RSpec and, more recently, Cucumber and

Additionally, BDD provides information on how to manage dialogues between developers, testers, and subject matter experts (SMEs). In comparison to Fit/FitNesse, notations generated from the BDD technique, such as the given-when-then canvas, are more lifelike and have a shorter learning curve, as demonstrated in the following example. Automatic documentation production from BDD "specifications" is frequently available with tools that are designed specifically for the BDD methodology.

Prior to the introduction of the BDD framework, everyone used TDD. It is only when all stakeholders are aware of the framework and have an acceptable level of technical skill that TDD is effective in software development. The reality is that this is not always the case. Because test cases are frequently written in plain text, such as English, BDD can serve as a link between technical and non-technical teams alike. Among the key advantages of BDD is that it uses fewer jargon and takes a more straightforward, clear approach.

BDD adds the following strategies to TDD and ATDD:

• Use the "Five Whys" principle to ensure that each suggested user story's goal is clearly linked to business outcomes.

• minimizing waste by thinking "from the outside in," that is, implementing only those behaviors that contribute most directly to these business outcomes.

• To facilitate communication, describe behaviors in a single notation that is readily accessible to domain experts, testers, and developers.

• Use these principles all the way down to the software's lowest levels of abstraction, paying special attention to behavior distribution, so that evolution is as inexpensive as possible. 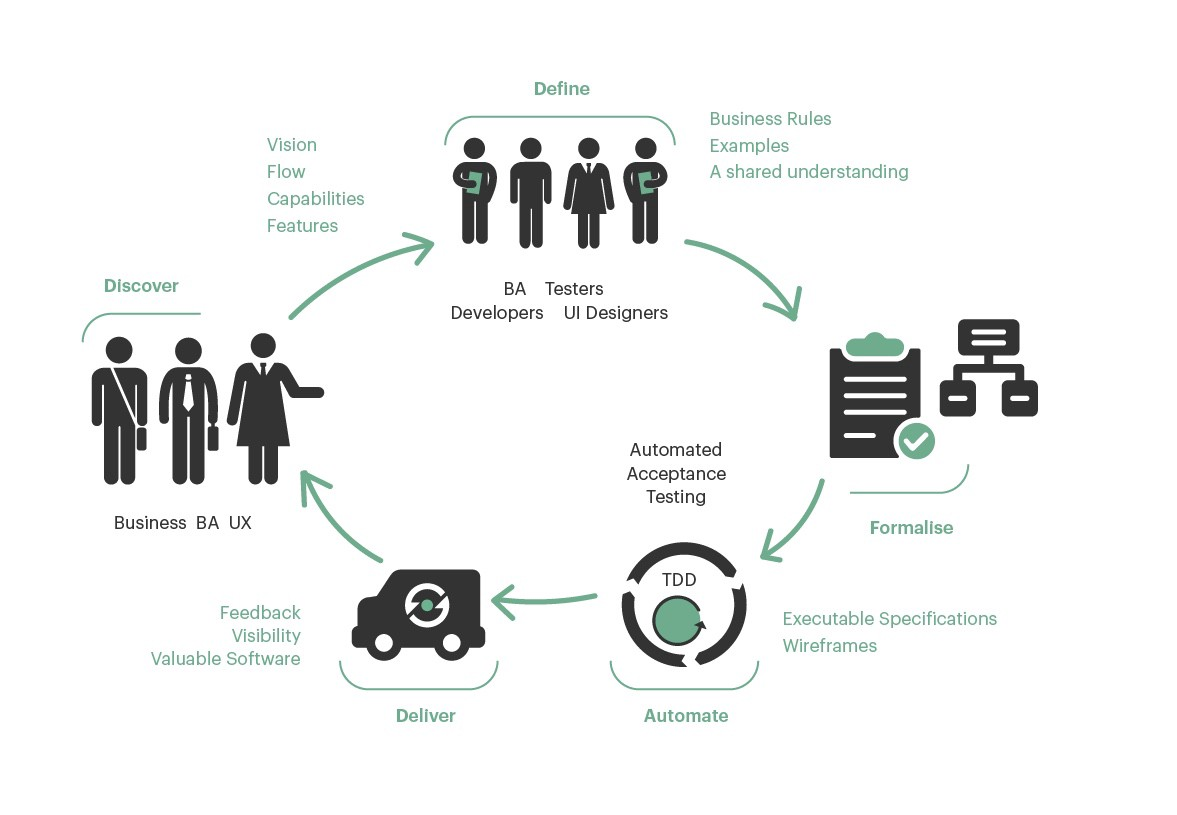 Conducting behavior-specific tests, or functional specifications, that specify executable scenarios for the programme, is important to behavior-driven development. This includes the following:

• Using the 5 Whys principle or an if-then scenario to create user stories and clearly connect application features to a business goal.

• Determining a single outcome for each action.

• To ensure accurate communication, each scenario is translated into domain-specific language (DSL).

• Collecting all behaviors into a single set of documentation that all developers, testers, and stakeholders may access.

WHO CAN IMPLEMENT BDD & OTHER AGILE TESTING METHODOLOGIES?

BDD or Behavior Driven Development is a methodology strategy that is becoming increasingly popular in the agile development community. It is a very effective strategy that is becoming increasingly popular. In most cases, starting with BDD is a good approach because it provides a solid basis for working independently with a range of technologies in the future. BDD encourages and necessitates communication and collaboration among team members in order to achieve high quality from the start.

You may now take PMI-ACP training online. A PMI-ACP certification can help you demonstrate your Agile knowledge while also developing your skills. The PMI-ACP certification training enables you to develop into a qualified agile professional with a firm grasp of a variety of agile practices. PMI recently revised the PMI-ACP training exam to include the Agile Practice Guide, and the ACP (Agile Certified Practitioner) credential is PMI's fastest-growing credential. The PMI-ACP course includes case studies and covers agile concepts, tools, and methodologies.