Service virtualization is a key process in which the service-oriented architecture that is microservice is leveraged as virtual services in DevOps to overcome the hurdles of traditional software development. There have been many problems and issues in the traditional software development life cycle. However, with the advent of newer technologies and systems, this gap has been minimized to a large extent.

The problems in traditional software development were that it was expensive, taking a lot of time and effort, a lot of errors and bugs needed human interference resulting in errors, high delivery time, no proper communication, no efficient collaboration between the teams, and no automation, etc. Due to the above factors, the traditional software development life cycle suffered a lot and made the worst nightmare for the teams. You can learn the service virtualization concepts with hands-on experience in the DevOps online certification courses.

Many technologies and systems came into existence and still, it was not helping the software development any easy. Many thoughts and ideas were proposed and the changes were made but still not until the advent of the DevOps culture the problems were resolved. DevOps culture solved all the problems that were the key problems in software development. We will touch on the topic of service virtualization below, but you need to understand what DevOps benefits are, such as frequent coding, testing, release and deployment, a lot of automation, less human intervention, fewer errors and bugs, great communication, enhanced collaboration, minimal delivery time and less expensive. In this article, we will cover what is service virtualization? And what are its advantages and some examples?

What is Service Virtualization?

The main issue in traditional software development is that many of the components need to be ready to test and deploy in production. Also, there is no sync between the services such as development, test, release, deployment in production, and operations. This was solved by having the virtual services so that each component is independent and sufficient with all the components in each of the phases so that you need not wait for all the phases to get completed. With the service virtualization components you can do multiple developments, test, integrate, release, and deployment of the same software very frequently so that for every small enhancement in the software. Instead of production services, virtual services are used so that they can be tested even when the software is not in production. The integration takes place using the virtual services so that the time of delivery is minimized and it is less expensive. 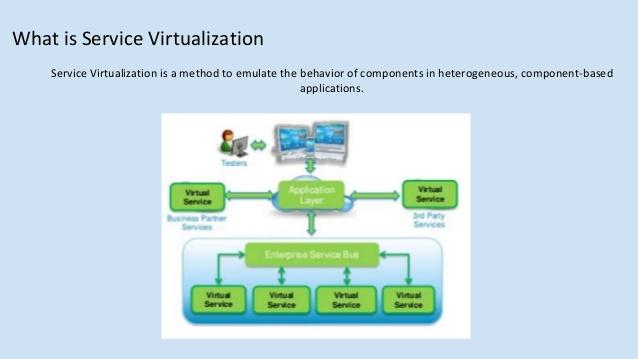 2) It is an isolated environment for the testing phase

3) It is an environment where all the components required for the production environment are present in the form of virtual services.

4) It supports the test-driven environment

7) It helps teams to work in parallel

8) It supports increased collaboration and communication in the teams.

10) A lot of service virtualization tools are available to manage the application to cut down the costs and increase productivity.

Website development – When developing the website there are different phases such as development, code, test, integration, release, and deployment. The different phases must be using the service virtualization concepts so that there is a website versioning and frequent committing of the website for each of the website components as it is developed. Until all the scoped functionality is included in the website the virtual services act as a production environment so that complete integration and testing is done for every version of the website. This helps in website delivery and minimizes the cost of the website significantly. One need not wait for the entire website to be developed for testing and checking the errors in production as it uses the service virtualization.

Application development – When developing applications for mobile or for normal application development we can use the virtual services so that frequent deployment is tested before even the application goes to production. Thus the operations overhead and errors are reduced significantly. The updates to the apps can be released as and when the apps are developed. Virtual services mimic the production environment in the testing and in developing stages making the operations and production resources readily available for all the initial phases of DevOps culture.

What is Microservice in Service Virtualization?

Microservices are the types of service-oriented architecture. The service-oriented architecture is the designing pattern and microservice is the implementation technology. For example, each of the software development components such as the functionality of the software is broken down into small components that are called the microservices. Microservices helps in software development to manage the large complex tasks to be broken down into smaller tasks for each of the enhancements of the functionality. Microservice is essential for the service virtualization as the software is committed in the repositories very frequently and deployed in the production frequently saving time on errors and patching it later.

What are the Software Languages that are Supported in the Service Virtualization?

The service virtualization started when the microservices architecture and DevOps culture started. So it is a very new concept and only a decade-old concept.

Now that you know what is service virtualization you can learn and apply the skills in the DevOps culture in your organization. Enroll in the DevOps training course and take your career to great heights. There are lots of jobs waiting for you to grasp as you get to attend the DevOps learning course.