DevOps usage has increased in the past few years. Both software development and IT operations really needed this increase. The automation of these processes using DevOps has had an impact on the industry and will soon lead to improved results with the many processes involved in software development, such as the deployment, configuration, and other duties. DevOps has aided the team in creating a variety of systems while keeping this viewpoint in mind however, its stability and performance are lacking. The lack of a team member who is fully committed to this task necessitates the use of SRE. In this article, you are going to learn all about one of the important terms in the team “Site Reliability Engineer”, we will also go through their roles and responsibilities. Furthermore, at the end of this article, we will tell you the best place where you can learn DevOps online and make the best career in this field.

What is Site Reliability Engineer (SRE)?

There are various processes in the team like- change management, software, and system management, incident management, and other IT obstacles. Therefore, SRE is the discipline in which these processes and the various aspects of IT obstacles are being handled with the amalgamation of software engineering and automation.  It will help the team to manage the operation as well as the infrastructure issues. The team will be responsible for making sure that there is productivity, efficiency, fluency, monitoring, and proper management of the services that are offered by the team.

The SRE team is the team of software engineers who are responsible for increasing the reliability of their system. They are engaged in the software development and implementation of those changes so that maximum efficiency can be attained using those services. As we are aware of the fact that the teams are adopting the DevOps culture in their team, they need someone to cover the gap between the development of the software in the team and the IT operations. This gap is filled by SRE. Now that we have an enhanced knowledge about what is SRE, we will now see why we need SRE in the team:

What does an SRE do? (Roles and Responsibilities)

After getting to know what is a Site Reliability Engineer, we will now go through the roles and responsibilities that they have to play in the team. This will give you an idea of what is expected from them and if you wish to have a career in this, then you are fully aware of all of these.

When SRE is hired in the team, they are responsible to add more reliability to the existing systems and services. So they can build software that not only will help the IT processes management but also help the support team. They bridge the gap between the development and the support teams. They can make changes in the code or build a new one to make sure that reliability is there and better incident management can be achieved.

There are many times there are issues that arise and an on-call decision needs to be made. This comes under the job profile on SRE. They can help the team to come up with a better process for making sure that on-call requests are managed efficiently without taking a hit at the reliability of the system. They can have an automated system for monitoring and alerts for the same so that these processes can be managed effectively. This way, on-call incident management can be optimized with the team of a dedicated team and automated tools and software.

When the SRE team is present in the team from the beginning, they have historical knowledge about various things that are going on in the project. They are part of the teams where the development, deployment, management of issues, and other tasks are being taken care of. Therefore, they are responsible for the documentation of all that knowledge. This helps the teams to have solid documentation of the things that have happened and currently going on in the team. This seamless flow of information comes in very handy for the team to work smoothly and acquire knowledge.

When critical issues arise in production, it is the job of SRE to resolve that and give time to make sure they do not arise again in the future. With time, it is seen that the system becomes more and more reliable and all the escalations are fixed. As they are the storehouse of the information regarding the process and system in the team, they are responsible to direct the issue to the right person so that quick action can be taken and the downtime can be reduced for the system.

If the engineers are not reviewing the incidents and the issues coming, they won’t be able to know about the cause and the ways to prevent that to happen in the future. So it is the responsibility of SRE to review what hurdles are coming in the process as well as the infrastructure and operations. This way, they can come up with a plan to optimize the reliability of the process and make sure that actions are taken to overcome that issue in the future.

Site reliability engineering can be thought of as an expansion of core SRE ideas and is closely related to DevOps, this comes out to be another concept that bridges software development and operations. As a result, SRE is crucial to putting DevOps ideas into practice.

In order to provide software more efficiently, DevOps and SRE both seek to close the gap between operations and development teams.

Although SRE "happens to embody the philosophies of DevOps, it has a much more prescriptive way of evaluating and attaining dependability through engineering and operations work," according to a Google article that distinguishes the two terms. In other words, SRE outlines specific DevOps success strategies. Both aim for the same thing, but still, SRE and DevOps are different in many ways from one another.

Site Reliability Engineers' practices support organizations by guaranteeing the proper operation of their outputs with the highest level of dependability and resilience. They use several tools and platforms for this, we have combined the list of types of tools and their examples for better understanding. Some of the tools are open source and free to use, we have mentioned that also.

How much does an SRE make?

We have collected data from publically available platforms like Payscale, Hired, and Glassdoor, official sources like the US Bureau of Labor Statistics, as well as covert inquiries among personal contacts, are all included in our research. Because major corporations are changing the way they handle IT, there is a robust job market for SREs. 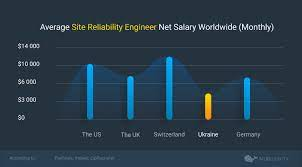 This article provides knowledge about the roles and responsibilities that are included in the job of an SRE in the team. We are seeing sharp growth in the use of DevOps and to make sure that the teams are getting all the benefits of DevOps in their team, the SRE should be present. This will increase the reliability of the system and will help the operations team to have a better hand at what goes into production. The SRE team will fit right into the crosswords in any team in the organization. With the DevOps culture, SRE will ensure that responsible and reliable code is being used and deployed in production and that efficient software development is done in the team.

So, if you are looking to add value to your team and want to have advancement in your career, then we have the best answer for you. With StarAgile, you will get one of the best DevOps certification courses which will help you in understanding the concepts of DevOps and how you can use them in the team. This is a vast area of knowledge and if you wish to succeed in this, then you need to just enrol yourself in this course and get started with your DevOps certification training. Get on your feet now and give a boost to your career with this best course.

What does a site reliability engineer do?

By taking on the duties traditionally performed by operations, a site reliability engineer (SRE) bridges the gap between development and IT operations. Instead, these engineers are tasked with solving issues by building scalable and trustworthy software systems using automation techniques.

What are the skills required for SRE?

The basic skills required by an SRE are coding and a decent understanding of operating systems, monitoring tools, CI/CD, Version control tools, databases and the cloud.

What are the roles and responsibilities of SRE?

SRE teams are responsible for proactively developing and delivering services to improve the performance of IT and support. This could involve anything from tweaks to monitoring and alerting to production-level code modifications.

What is SRE's role in DevOps?

SRE tooling and procedures support DevOps principles and practices, which is why SRE and DevOps are frequently referred to as two sides of the same coin. SRE entails the use of software engineering principles to automate and improve ITOps operations such as capacity planning and disaster response.