What is Critical Chain Project Management

In 1984 an Israeli business management expert Eliyahu M. Goldratt came up with the book called 'The Goal' and introduced the theory of constraints in that book. Then he came up with another book called critical chain in 1997 which again focuses on the concepts of managing projects. This book critical chain project management is considered as an alternative to PMBOK by project management professionals. In this methodology, constraints are assumed related to each task, and the details of how will be discussed in this article.

Critical chain method (CCM) is the longest path of the project that prevents the project from being getting completed in the shortest time.

The critical path method (CPM) is the longest path through the schedule with having a zero float or a negative float.

CCM is the modified form of the CPM that considers the availability of resources when making the project schedule.

The theory of constraints is the concept that says that there are fewer numbers of constraints that are there in the project which will prevent the project in achieving the goals, objectives, and requirements. We need to identify the constraints and restructure the processes to make it successful. It enables one to find the weakest link in the project that has the risk of preventing the project from the derailment. It can be anything from team members, processes and organizations, etc.

In 1984 an Israeli business management expert came up with the book called 'The Goal' and introduced the theory of constraints in that book. Then he came up with another book called critical chain in 1997 which again focuses on the concepts of managing projects.

The key assumption in the theory of constraints is that three parameters are there by which the organization can be managed. They are as follows,

Now we need to understand what to do with the theory of constraints in such a way that the processes make the projects successful. It is called the focusing process; it is illustrated as follows,

The theory of constraints has a methodology called the thinking process that is made up of many interdependent complex processes. The thinking process is a cause and effect tool that removes many root causes of the undesirable effects without creating a new one. To do this there are three questions one needs to ask they are as follows,

Now for measuring the throughput accounting there are 4 measurements those are listed below, 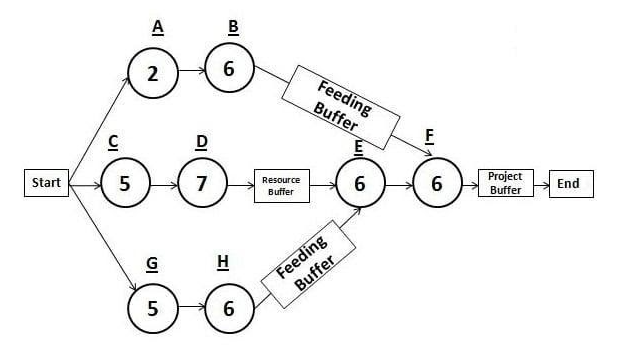 It is the longest path in the network diagram considering resource constraints and interdependence.

In the traditional methods such as the waterfall method, the tasks are added with the extra time and started the interdependent tasks as soon as possible and doing the parallel activities to manage the uncertainties. Whereas, in a CCM, the uncertainty is managed by estimating the average time duration for each task and then scheduling those tasks and leaving out all the unnecessary tasks. Here in the CCM aggregate buffers are placed in the project to control the project. The key tasks on which the project depends are called a critical chain.

There are three types of buffer placed in the CCM so that it does not extend the project schedule.

c) Resource Buffer - These buffers are kept alongside the critical chain so that the key resources are available when there is a need. Here the resource can be a person or equipment.

It was initially adopted for the manufacturing industry and the semiconductor industry has been successfully adopted in the software and IT industry as well. There are many examples where the software industry has cut down the project cost and project time by using the CCM. It was also used in embedded systems, semiconductors, and hi-tech industries successfully to cut down the cost and the delivery timelines. More of the live and real-time examples will be covered when you register for PMP training online with StarAgile and that is the chief advantage of this course.

Finally – Did you understand what is a critical chain project management

Is the critical chain method difficult to grasp? Do not worry as StarAgile’s PMP certification training course will clear all the doubts and you will be able to work on your own with the real-world example.

If you are in doubt talk to StarAgile’s PMP Training Online coordinator now and enquire about the PMP certification cost.