We warmly welcome all project managers and congratulate you for achieving this position. Even if you are playing the role in one project, never mind. Still, you are identified as you have the potential to plan, organize and execute. You may now think about giving your best and hence you may want to get PMP Certification.

In case you have studied any of the previous versions, it is good. However, there are major changes introduced in the 6th edition by PMI and hence we strongly suggest you read this blog to understand the modifications.

Origin and Growth of PMBOK

Before getting into the details about the modifications in 6th edition, we will just summarise about PMBOK and its growth to the 6th edition. First of all, know that PMBOK is the abbreviation for Project Management Body Of Knowledge. It is released by PMI to help PMP exam takers and all PMs to realize the pmp certification value. Yes, it released its first edition in 1996 explaining about the standardization of project management approach. It is considered as a guide to all pmp certification course providers, takers, and PMs as well.

Then on once in every 4 years, PMI updated their edition with several additions, modifications, and removal of details to polish the project management process. From the above infographics, you can understand the release year, version number, purpose of release, project group number, knowledge areas, processes and page number of each version.

For instance, let us explain one edition and help you learn to derive information from the infographics. We will take the PMBOK 5th edition. It was released in the year 2013 and was released with the purpose of making some advancement in the project management approach such as adaptive lifecycle, rolling wave planning, etc.  This book contains 620 pages and there are 47 processes. With 5 project groups, the 5th edition had 10 knowledge areas. Feel free to look at all the other edition to know how every version contributed to the PMs community.

Based on the sixth edition you can notice that the pmp certification syllabus 2017 had gone changes. So you must understand the difference contributed in the 6th edition compared to the previous edition.

It’s high time we get into the details.  PMBOK is popularly known as the GOLD standard.

The project group primarily depends on the order in which a project is carried out. There are 5 groups as defined in PMBOK and all the 6 editions have these 5 groups. They are listed as following

It is all about managing each field in the project

You can see the image below to look at the processes in the 5th edition as given by PMI. Let us understand how the 6th edition differs from this. There has been constant addition in the processes from 1st edition till now as shown in the graph below. 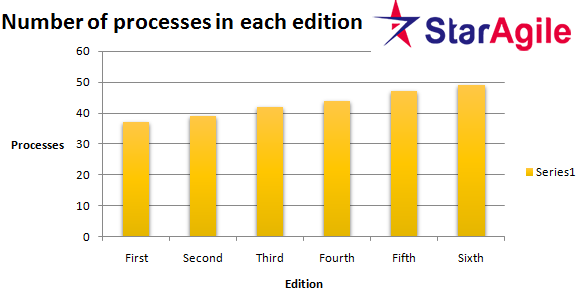 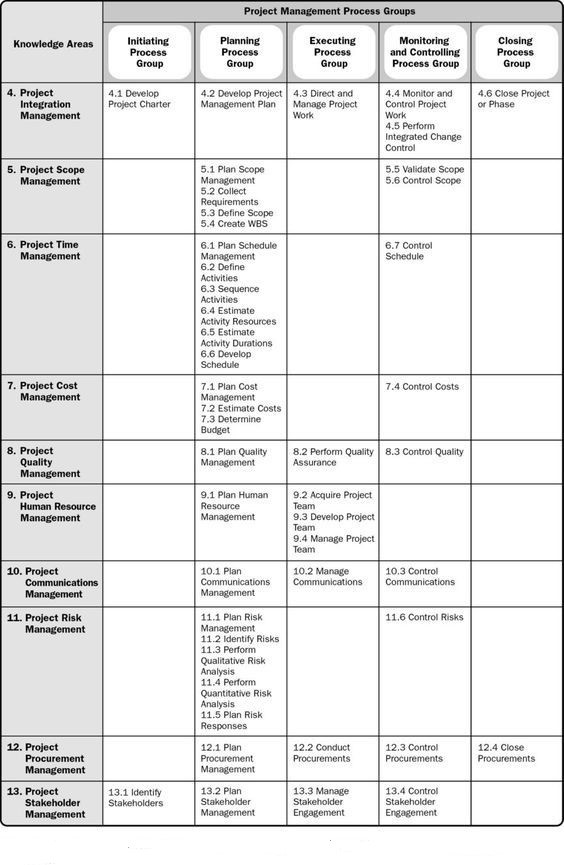 There were 13 chapters in the 5th edition which is now consolidated to 10 chapters. First 3 chapters discussed the framework of project management and the role of the PMs. Also, the organization portfolio and structures were explained along with the SDLC.

In the 6th edition, these are summed up and presented in one chapter as the primary functions of the PM. Also, the role of a PM is mapped into the PMI talent triangle. Here a PM is expected to understand not only technicalities of the project but also exhibit leadership skill in managing people and providing a strategic solution to the business team.

There is 3 new processes included in the 6th edition, 9 processes have been renamed, and one process is removed.

Let us list the details in the table given below.

Due to the above-mentioned PMBOK 6 changes, the following things will change and you can easily master them by attending pmp certification classes.

•You need to understand the processes added, removed and renamed which will be covered widely in the questions

•Get a hold on the knowledge area renaming and how does it make a difference. Also, read about the inclusion of new sections in the chapters.

•Appendix contributes a great value and you must master them to firmly grip over agile methodology.

However, we will suggest you join the pmp training course and they will take care of all your needs to prepare for the pmp certification online.

So far you have read about the details of PMBOK, the editions and the changes in the recent edition PMBOK 6th edition. Yes, before we wrap up I do not want to summarize as the details are already given above.

But, let me highlight a few minor changes in PMBOK 6th edition which was missed in the blog. PMBOK 5th edition had OPA and EEF and 6th edition additionally has details on the governance, the structure of the organization and the management components. Communication and communications are clearly distinguished. The former is the talk between people and the latter one is the artifact including memos, emails, and presentations. Finally, a fine difference between the concept of project and product scope is mentioned in the 6th edition.