Difference Between Docker Vs Kubernetes Docker vs Kubernetes is a comparative study to know them in greater detail.

Cloud technologies are the latest buzz words and transforming lives and technologies across all domains.  There are a lot of popular commercial cloud service providers and there are open source cloud providers also.

Cloud architecture benefits in various ways than on-premises architecture such as no cost of deployment, scalability, business continuity, collaboration, meter cost that is Pay-as-u-Use, no overheads, no maintenance cost, and easy to deploy architectures.

You can deploy both open sources as well as private applications on the cloud. In this article, we will get to know about 2 cloud technologies namely Kubernetes and docker.

What are Kubernetes and dockers?

We will start knowing about the dockers first and it is the software that runs on the OS and supports many containerized applications. Containerization is a concept that makes each application runs on an OS that has its unique instance of the OS. By this, the application is said to be run in a container in such a way that it is independent and isolated from every other application and systems and gets its OS instance. Docker has such many containers and each container has its specific application. Docker allows creation, running, and managing containers in just one OS. 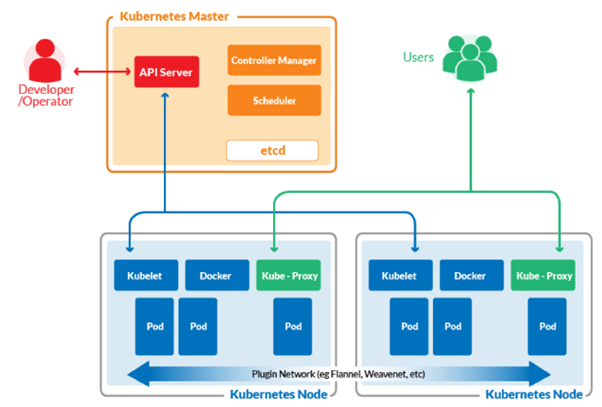 Unlike VM’s which take a long time to deploy and also configure the hardware in the cloud, we use docker which virtualizes the OS and runs isolated applications on top of the single OS. Each application with its libraries and binaries forms the container.

There are 2 concepts to know in Kubernetes such as nodes and pods.

For example, if you have a web server and cache server that are interdependent on one another they can be put in a single pod.

There are 2 types of nodes they are a Master node and worker node.

There are several features of docker, they are as follows,

We will look at 3 of the features in detail

a)Application Isolation – It is used to isolate the independent application and binds it with the OS with a unique and distinct instance. Thus it provides application isolation by isolating the application containers.

b)Swarm – This tool is used to schedule and cluster the Docker containers. It uses docker API as the front end which provides us the various tools to control it. It can be used as a pluggable backend and helps us to control the cluster of hosts as a single virtual host.

c)Security Management – It helps to create security management by allowing us to save secrets in the swarm itself. Then we can give the service access to certain secrets. Some of the commands such as secret create and secret inspect can be executed using this.

Again before we compare Docker vs Kubernetes you need to know their features in detail. Here you go with the same.

We will discuss 3 of them in detail.

2) PodDisruptionBudget – PDB is the feature of Kubernetes which restricts the number of Pods in the cluster. It allows keeping the minimum number of pods active when there is auto-scaling down, maintenance and upgrading. When there is an administrative activity it helps to prevent application availability and performance from being impacted.

3) Health Checking – We can check the health of the pod or applications by putting a probe called a kubelet agent.

There are 3 types of probes available they are:

a)Readiness Probe – This determines whether the pods are ready to take the requests. If the probe fails, then the IP address of the pod is removed from any endpoints that direct the traffic to the pod.

Probes can be customized with parameters such as minimum retry attempts, delayed runtimes, timeouts, and minimum success or failure thresholds