Blue-green deployment is a procedure for introducing additional coding into the system to reduce server downtime, make it more accessible for new modifications to be rolled back, and avoid service problems for mission-critical services. A blue-green deployment uses two equally prepared hardware settings, one serving clients and one being inactive. As a result, latest features can be delivered interactively and checked for issues, with the idle setting acting as a standby location for traffic in the event of a breakdown.

The last form was the blue environment, while referring to the existing model to as the green setting. The blue server can either be placed in standby mode or removed from service and revised to serve as the template for the next upgrade when all functional activity has been successfully transferred from blue to green.

Large enterprises are embracing online DevOps training to create synergies between development and operational groups. In addition, top businesses are utilizing DevOps learning to improve the stability of their functionality outputs, allowing them to maximize their quality of service output results.

Users' acceptability testing and quality assessment are often carried out in the blue environment where latest features and upgrades are hosted. When further improvements have been tested and confirmed in the blue atmosphere, user traffic is switched from green to blue. As the implementation has been completed successfully, you will be able to upgrade to the new setting.

Blue/green implementations can help avoid some of the most frequent hazards involved. In the event of complications, you can quickly revert traffic to its former condition. As a result, blue-green deployments are less dangerous than other deploying methodologies.

Blue/green deploys enable near-zero-downtime deployments and rollbacks. The fundamental idea of blue-green deployment is to redirect routes between two similar settings, so that each executes a modified form of your program.

It contributes to the reduction of downtime, and in some instances, eliminates it based on the program's planning and design strategy.

It enables quick application rollback in the event of a production issue. By simplifying the rollback procedure in a failed deployment, a blue-green deployment strategy promotes application availability and decreases deployment risk. After the completion of testing on green environment, active program activity to the green background, deprecating the blue setting.

To overcome these obstacles, application and server groups must develop and implement a blue-green deployment strategy appropriate for their usage purpose. Deployment approaches are procedures for changing or upgrading an application's operating configuration. Six different strategies are explained below.

This type of deployment updates all terminals in a specific environment simultaneously with a new program or artifact version. As a result, basic deployments are not impervious to outages and significantly slow down rollback operations or techniques. It is the most challenging implementation strategy provided.

This method is simple, quick, and affordable. Use this method when

1) Your app service is not business-critical, mission-critical, or

2) Your deployment is in a setting that is minimal, off-hour or non-usable.

2. The Deployment of Multiple Services

Multi-service deployments update all nodes in a specified environment at the same time. This method is suitable for apps that has or are dependent on services or versions or when you deploy off-hours to unused resources. Multi-service deploys are easy, quick, and less risky than basic deployments.

A rolling deployment strategy is a method of deploying an application that automatically replaces running instances with the new release. All endpoints in the targeted system are progressively upgraded in integer N batches with application or artifact versions.

The advantages of a rolling deployment include the ease with which it can be rolled back, the lower risk associated with it compared to a basic installation, and the simplicity of execution.

What is blue-green deployment? It is a methodology for deploying an existing application that makes use of two similar conditions, a "blue" (aka stage) and a "green" (production stage) configuration, each with a distinct version of the app or system. QA and UAT are often conducted within the blue platform that accommodates updated versions or modifications. Once new improvements have examined and approved in the blue setting, user traffic is switched from the green to the blue environment. After the deployment is complete, you can change to the new surroundings.

One of the advantages of the blue-green deployment strategy is that it is straightforward, quick, well-understood, and simple to deploy. In addition, rollback is simple, as you can easily change traffic back to the earlier settings in the event of a breakdown. As a result, blue-green implementations are less dangerous than other deployment tactics.

A/B testing is a process in which multiple versions with the same service are run concurrently as "experiments" in the exact location. Experimental studies are initiated by toggling features flags, using A/B testing methods, or deploying specific services. The experimentation administrator is responsible for defining the routing of user activity to every experimentation and version of the application.

The primary distinction between the A/B test and specific other deployments methodologies is that the A/B test method is mainly concerned with exploration and investigation.

A/B test is a widely used, simple, and inexpensive technique for evaluating innovative features in operation. And, fortunately, there are numerous tools available at the moment to assist with A/B testing.

A canary implementation is a mechanism for slowly releasing an application to a set of variables. As a result, the specified environment's infrastructures are upgraded in minor steps (e.g., 2 per cent, 25 percent, 75 percent, 100 percent). Due to these controls, a canary release is the least risky of all deployment options.

Canary implementations enable enterprises to conduct in-production testing with legitimate customers and use cases and compare multiple service levels side by side. In addition, it is less expensive than a blue-green implementation since no two production settings are required. Therefore, it is secure and straightforward to initiate a rollback to an earlier version of the application. 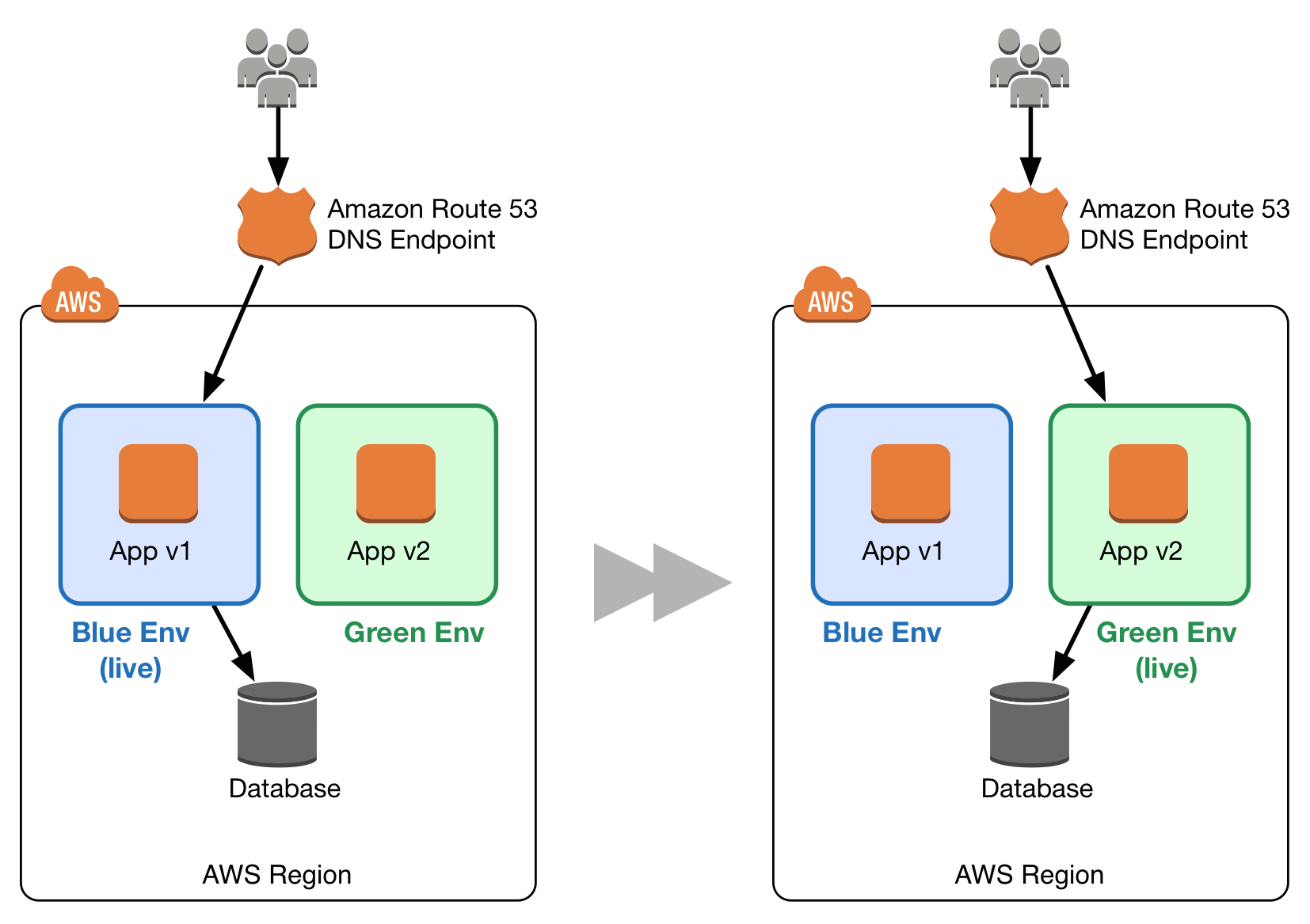 The on-premises client setting (A) is blue, while the desired AWS environment (B) is green. After testing, monitoring, and stabilizing the Green target application, traffic is redirected from A to B, with A remaining idle. Depending on the application infrastructure and industry demands, the following alternatives for blue-green deployment AWS settings can be implemented:

A DNS validates a domain name and sends queries to the corresponding network interface. Based on DNS specifications, AWS Route53 can direct traffic to an AWS service or an external location. This will allow all communications to go through the new AWS Green infrastructure (B).

The new blue-green deployment AWS setup is deployed as nodes to the existing Load Balancer with balanced distributions.

Elastic Beanstalk is an Amazon Web Services PaaS solution that automates the provisioning of settings with predetermined specifications and controls a range of alternative circumstance variations. The EBS-Swap capability is used with zero downtime when blue/green settings have been set up so that the EBS console can easily swap the A and B URL.

By making a simple API request, we may switch the IP to some other EC2 instance. When Blue/Green cutover is performed, the resulting EC2 model hosting the testing program is assigned the Blue environment's Elastic IP.

Choosing the appropriate approach requires an in-depth examination of the business system, data sensitivity, solutions, downtime, and network utilization transmitted across the interfaces, among other factors.