What are Kanban Cards : Examples and Types

Kanban cards are used in the Kanban board that indicates each task and work structure in the project. These cards move from left to right in different stages of the projects with a pull mechanism and help to prioritize, sequence, manage and control the elements of the project. The history of Kanban is very old and dates back to the 1600 century.

In the year 1940, a Japanese engineer named Taiichi Ohno invented Kanban. The word Kanban in Japanese means billboard. Kanban is nothing but an efficient scheduling system that works with the principles of Just-In-Time management and Lean management. In the early 1980’s it was still used in the manufacturing industry but later adopted in many industries including, retail, logistics, IT, and software development.

The idea behind using these cards is to visualize the workflow from left to right in the Kanban boards with different stages of the projects from start to finish. They make the system efficient without stopping with any bottleneck, by addressing the issues and working on the tasks that need more attention by controlling the movement of the task, managing the output, and prioritizing the important ones. In this article, we will see what Kanban cards are and how to make use of them in our daily work that is in any of the project management. To know more on these topics get the Kanban certification from the reputed institute.

What is a Kanban card?

A Kanban card is a task in project management that travels in the Kanban boards from the start to finish or from left to right till the work done stages. 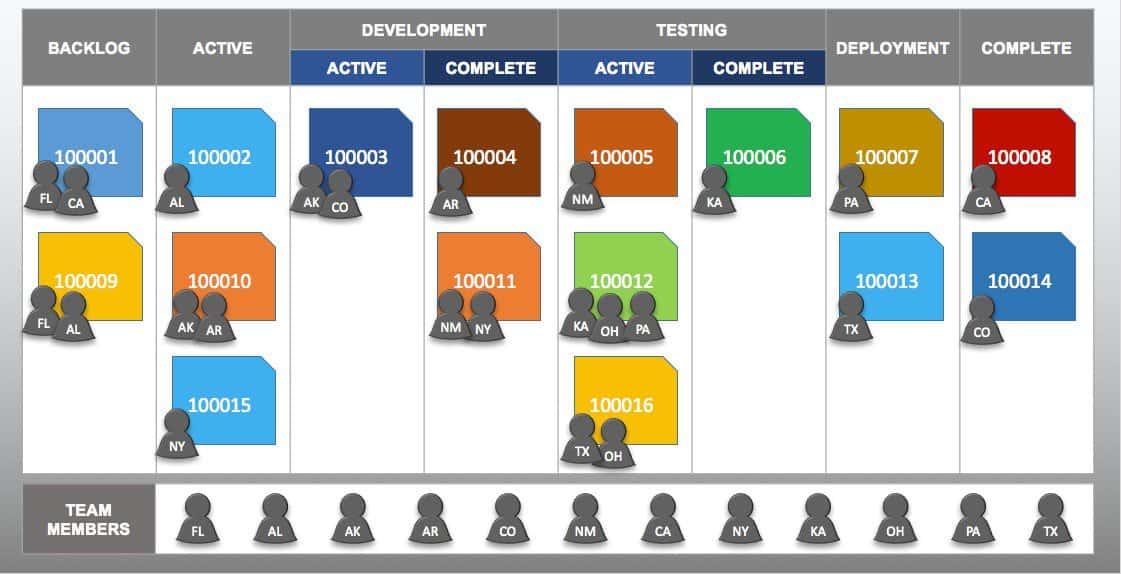 From the diagram the backlog items are the sequence of items that are prioritized based on the importance and then aligned in order, then each card travels to the right to the next column. In the active column are the cards which are kept to be absorbed by the work-in-progress columns. For example, there are two work-in-progress stages such as “Development” and “Testing”. Each has two workflows that are Active and complete. Once the tasks in the software are complete it moves to the next column and then to Testing and so on. The third is “Deployment” where the applications are hosted in the production. Once the parts of the software are hosted in the production and are working fine then the tasks move to the “Complete” status which is nothing but the “Work Done” column. Thus when one of the cards traverses from left to right the next subsequent card occupies its place. The nature of the Kanban card systems is the pull mechanism and not the push mechanism. That means the cards get replenished when some work is done on the right side of the Kanban board.

Based on the nature of the column in Kanban Board, the Kanban cards are described as active cards, WIP or the “Work In Progress” cards, and then “Work done” cards. Other cards are Blocker cards which mean that the task is delayed due to some issues in the tasks and is moved to the “Blocker” Column. These tasks will take more time, and find the root cause of the issues, and resolve the issues. There are other cards called WIP Limit, this card indicates how many tasks or cards a particular column says the “Work-In-Progress” column may contain. Beyond which that particular work will get burnt down. To avoid Burnt down of the work the WIP limit is set so that cards move freely and smoothly from left to right of the board.  That is there is a definite ratio between the tasks completed and tasks in “Work in Progress”.  The first column is called the “Backlog” column in this column the tasks are sequenced and prioritized and these cards travel in this column from bottom to top and then the topmost cards travel to the next column. Get the Kanban certification to work on real-world projects and also get certified on Kanban.

In the early 2000, digital cards came into existence which are similar to physical cards but have a dashboard and digital cards in the automated software in the computer. It is very easy to work with digital Kanban cards and there are very less errors due to less human intervention. Also, the Kanban cards are tracked automatically by the software. These Kanban cards in the dashboard can be viewed by all the team members from their computers and each team member knows the status of the project accurately.

Here in this example, the cards are put in each product manufacturing station. As the products are getting manufactured on the far right stations the Kanban cards move to the left with the empty bucket, and so on till it reaches the Items replenishment section or the Raw Materials section. Usually, there are 2 buckets in each of the stations when one gets over the buckets along with the cards are replaced to the right of the stations. It starts with the two buckets in the raw materials section. When one bucket gets to the station the raw materials are ordered and thus the system moves on from left to right till all the product items are moved to the customer’s place. Kanban cards play a very important role in making sure that the production and the demand are met adequately. Register for the Kanban training at StarAgile institute to know more on this topic.

In this example, there are columns such as “Backlog”, “Work-In-Progress” which are divided into Development, Testing, and production, and then the “Work Done” column.

As seen that Kanban is used in many industries and even in modern software development. Learn about the core principles of Kanban before you deep dive into it. To know more about the Kanban cards take up the Kanban certification online training at StarAgile institute. Get professional training in Kanban and use the Kanban cards in your real-world working projects. Happy Learning!!!