Scrum Alliance Made It Virtual Training Now Due To COVID-19. It's the right time to earn a certificate from the comfort of home!

What is Sprint Burndown Chart in Scrum

What is a Burndown Chart?

Burndown chart is nothing but a graphical representation of amount of work left to be completed versus the time. It can also be called as RUN chart displaying the data in time sequence. It is a picturesque depicting what hundred words put together might not be able to communicate so effectively.
The amount of work remaining is shown on the vertical axis (Y axis) and the time passed since the project has begun is shown on the horizontal axis (X axis). 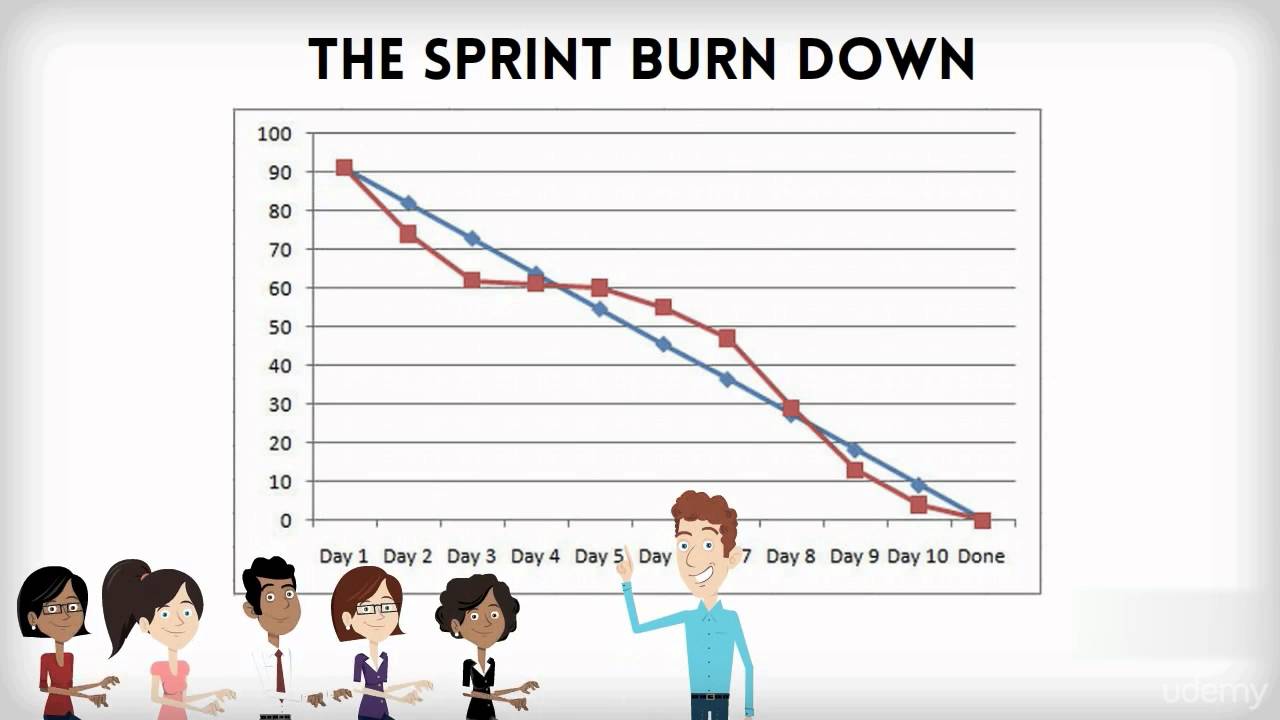 History of the Burndown Chart

Burndown chart find their origin since Scrum is designed. It has been observed Burndown charts were never part of managing any software project or other effort. It was formally described by none other than Ken Schwaber in the year 2000 while working at Fidelity Investments to create simple tool kit for scrum team.
In the year 2002, its popularity got increased in the Scrum community and so was its implementation along with Burn Up chart which merely inverts the vertical direction and used for better understanding of releases in the sprint.

Variations of the Burndown Chart

How to Read a Burndown Chart

Agile burndown chart demonstrates several key points. On the X-axis, the project or iteration timeline is defined. On the Y-axis, the amount of work that needs to get accomplished in the project is defined. The story point estimates for the work that remains is represented by this axis. Each day amount of work remaining will be calculated by subtracting from the total effort. Burndown chart gives an overall idea if the project is heading in the right direction as perceived by the ideal line which is drawn by calculating the number of hours ideally team would require completing the task they are working on through the sprint.

What is the Purpose of Sprint Burndown Chart?

Benefits of Burndown chart are mentioned below:
1) Team members can save time by tracking the progress of the sprint visually instead of sorting through email, tasks and documents for status update.
2) Project managers can get better view of the sprint and plan more effectively.
3) Burndown chart can help team members to constantly evaluate team performance daily and prioritize work based on the status thereby alerting teams about bottleneck situation and issues at hand.
4) It acts as an information radiator that gives instant status of the sprint.
5) Act as a motivator to the team

What are the Limitations of a Burndown Chart?

Limitations of the Sprint burndown chart are listed below:
1) It focusses on the task completed but not on what task is in progress
2) It does not show impact of scope changes

When to use Burndown Chart

How to Create Burndown Chart

Below Mentioned are Steps to Create in JIRA:

As the team is self-organising, the onus to create and update Burndown chart lies with the development team. It can be argued that the scrum master can create and update the Burndown chart but as the team works closely on task themselves, it can motivate team to see the success closely in terms of tasks completed and if the chart doesn’t show positive graph they can take necessary steps to avoid further debacle.

Conclusion:
In a way, Burn down chart is very important for any project in agile to get a picture of how much work is pending and how much has been completed by team during each Sprint. Since agile doesn’t come with much documentation, burn down chart can be definitely be one great matrix.

To understand more about Sprint burndown and release burndown charts attend StarAgile. certified scrum master certification or call us at +91 – 80502 05233

Call Us
Drop A Query
Drop a Query
trainings@staragile.com